I originally published this recipe along with my recipe for Carrot Cake Cupcakes with Cream Cheese Frosting but I think it is sensational enough to deserve its own post.

After many, many years in Austria and countless batches of runny, drippy frosting that were only suitable for the garbage can, I have FINALLY found a recipe for Cream Cheese Frosting that turns out EVERY TIME.

It’s actually not so much the recipe itself as the METHOD for making the frosting using European cream cheese, which contains more liquid than the American cream cheese that is available in blocks or bricks in the U.S. The cream cheese in Europe is essentially a cream cheese spread. Even the Philadelphia brand cream cheese is a spread.

The problem is that when you add sugar to cream cheese spread, it draws the liquid out of the cream cheese, resulting in the soupy consistency I mentioned earlier. Normally, adding some additional powdered sugar would thicken up an American buttercream like this one. But that doesn't work in this case. No amount of powdered sugar can rescue a runny cream cheese frosting. Believe me, I have tried!

The key to success is binding the powdered sugar with the butter first and THEN the cream cheese can be safely mixed in without the sugar drawing the liquid out of the cream cheese. Applied physics!

I am so excited I finally found the key to making my favorite frosting with European Cream Cheese! The taste and texture are just right. You can pipe it or use it to fill and frost cakes. If you use a stand mixer it’s really easy to make. Try it!

The cupcakes featured in these photos are my Perfect American Vanilla Cupcakes, absolutely dreamy light, moist and fluffy vanilla cupcakes. Cream Cheese Frosting is the best frosting for Carrot Cake as well as Banana Cake, Red Velvet Cupcakes, Chocolate Cupcakes and much more.

On to the recipe!

After beating the butter and powdered sugar together you will have a very stiff buttercream. Then you can beat in the cream cheese. The result is this heavenly frosting. 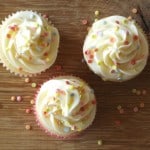 Adapted from Eat and Feast, Sugar-Sweet and Herznah.