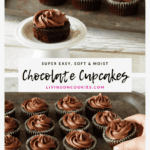 An absolute must for chocolate lovers! This is a basic American cupcake recipe, but these decadent Chocolate Cupcakes with Chocolate Buttercream have plenty of chocolate flavor and a moist, fluffy crumb.

The Chocolate Buttercream is ready in minutes and is rich, creamy, chocolatey and not too sweet. Watch out: these are addictive!

These Chocolate Cupcakes have been a long time in coming! My recipe for the Perfect American Vanilla Cupcakes has been on the blog since 2016 and it continues to be one of my most popular posts. There needed to be a recipe for the perfect chocolate cupcakes too!

It’s just that chocolate cake and I weren’t the best of friends for a very long time. My recipes from the U.S. just didn’t turn out here in Austria.

I can’t even tell you how many times I was freaking out on one of my kid’s birthdays because I, yes I, couldn’t bake a decent chocolate cake. My husband would go to the store and buy a cake mix for Sacher Torte and bake the cake himself. It’s a funny story but I didn’t think it was that funny at the time.

I always chose recipes that promised a super moist homemade chocolate cake. Everything would seem fine while the cake was in the oven and it was done according to the wooden toothpick test, but, as the cake cooled, it always sank in the middle. It was gummy and just garbage.

I normally love fudgy and gooey but cake should have a certain crumb, a moist crumb is what I was going for.

By the way, just a little side note here, if a cake doesn’t turn out, you don’t have to throw it in the garbage! (Unless the batter is still raw, then it’s a health risk eating it.) You can use the cake to make cake pops or stir chunks of the cake into ice cream!

I’m ashamed to admit that it wasn’t even that long ago that chocolate cakes were still sinking on me. It was like some kind of curse! I knew from my experience with cream cheese frosting that there had to be a way.

I tried other recipes for chocolate cake but they were just ok and didn’t knock my socks off. They were too dry and/or didn’t have enough chocolate flavor.

The Chocolate Buttercream Frosting on the cupcakes is at least as good as the cupcakes themselves but we’ll get to that in a minute.

These Chocolate Cupcakes are the best chocolate cupcakes! They are:

Those are my criteria and I’m really pleased with this recipe. These homemade Chocolate Cupcakes really are quick and super easy to make but, as is the case with any recipe, there are a couple of things you have to watch out for.

There are a few key ingredients in the cake batter. I like to use cocoa powder for chocolate cakes because it’s easy and it lends the cake a lot of chocolate flavor. Isn’t actual chocolate also made out of cocoa?

The chocolate flavor is then enhanced with coffee. I whisk the cocoa powder into the hot coffee to allow the flavors to develop or “bloom.” If you don’t have any coffee at home, you don’t need to buy any just for this recipe – you can use hot water instead.

Baking powder, buttermilk and baking soda make the cupcakes nice and fluffy. I’ve tried this recipe many times and one of the keys to success is using all three of these ingredients. Otherwise you run the risk of the cupcakes sinking as they cool. The baking soda needs the acid in the buttermilk to react and create air bubbles.

The batter is very runny. It’s important that you don’t overfill the paper cupcake liners. They shouldn’t be more than two-thirds full. The cupcakes do rise but if the liners are too full, the batter spills over rather than creating tall cupcakes. This isn’t really a bad thing; these are just fun little cupcakes.

Finally, the cupcakes are baked at a slightly lower temperature than usual so that they stay nice and moist.

Now onto the Chocolate Buttercream Frosting. It is:

Heavenly! The frosting is an American buttercream but don’t worry – it’s not too sweet! Thanks to plenty of cocoa powder and a pinch of salt, this Chocolate Frosting is perfectly sweet and has a fudgy, decadent chocolate flavor. And because it’s an American buttercream, you just beat everything together and you’re done. So easy! Bonus: the buttercream recipe makes just the right amount of frosting for the number of cupcakes in the recipe. I’ll admit this was sheer luck!

Cupcakes that the Chocolate Buttercream would be great with are: these Chocolate Cupcakes, Marble Cupcakes or Perfect American Vanilla Cupcakes. 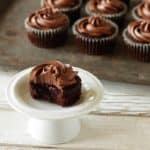