I’m not gonna lie: making homemade cinnamon rolls is a lot of work and most people aren’t used to baking with yeast.

I can assure you that each step of the process is simple to follow and is clearly explained in the recipe below. You can make the dough using your standing mixer and there is no hand kneading required. If you want to make these for brunch or for Christmas morning, you can make the cinnamon rolls the night before, chill them overnight and bake them off in the morning.

This recipe is from the blog Tastes of Lizzy T and is one of the most popular cinnamon roll recipes on the internet. These cinnamon rolls are truly amazing and are the perfect from-scratch recipe. The dough is soft and rolls out nice and thin so you get lots of beautiful swirls.

While the frosting is absolutely essential in me and my kids’ opinions, you can’t really taste the difference between a cream cheese frosting and a simple vanilla glaze here. The frosting is a minor player and is only there to accentuate the yummiest of the roll itself.

I’ve also found that it’s best to keep the frosting on the side or at least save it for after the rolls have cooled so it doesn’t get absorbed by the warm rolls and disappear, creating the need for yet more frosting on the side. Too much frosting is not a good thing here, as we don’t want to enter the territory of too-sweet. By the way, these cinnamon rolls are also moist and gooey without the frosting. 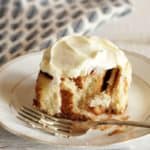 *Or Easy Vanilla Glaze: 2 cups (220g) sifted powdered sugar, 1 teaspoon vanilla extract and 6 tablespoons heavy cream. Whisk ingredients together, adding more cream if necessary to reach desired consistency. **If making ahead, at this point, you could place the rolls in the refrigerator overnight and allow them to come to room temperature and rise the next day, then spoon cream over the tops before baking as above. Recipe adapted from Tastes of Lizzy T.

If you’re looking to have that delicious cinnamon roll flavor without the work, try my super quick & easy Cinnamon Roll Cake or Cinnamon Pancakes with Cream Cheese Glaze.