Vanilla extract is made using only two ingredients: vanilla beans and vodka. That’s it! I have been using my own, homemade, pure vanilla extract for at least 10 years. Here’s a picture of the actual bottle I’ve been using. You see, it’s perpetually renewable. You just top up the vodka as the level gets lower. You can also add new vanilla beans. Periodically, you can remove a vanilla bean or two to squeeze out the seeds to use as vanilla bean paste in your recipes and replace with fresh vanilla beans, as in my recipe for Cheesecake Cupcakes with Berries & Cream.

Vanilla extract is ridiculously easy to make yourself and, in the long run, much cheaper than store-bought vanilla. It’s all-natural. Nothing goes to waste. But how does it taste? Just look at deep amber color! It’s pure vanilla flavor.

If I’m being perfectly honest though, as with so many things, I figured out how to make my own homemade version not for the above reasons but out of necessity because vanilla extract isn’t available to buy in Austria. It’s hard to believe, I know! I still look for it just to see if they’ve started carrying it in the stores. Maybe next to the rum and lemon flavoring they sell in these tiny little perfume sample-type of vials? But nope, to this day, you will not find vanilla extract in even the biggest supermarkets in Austria. You can find it at specialty stores if you look hard enough.

Why use vanilla extract? Because the flavor is better and I like that you’re not adding a tablespoon of sugar to the recipe. Vanilla extract is also better in icings, frostings and buttercreams because you don’t have the granulated sugar crystals that might not dissolve, leaving a grainy texture. If you like baking using American recipes, it’s definitely worth making your own vanilla extract! 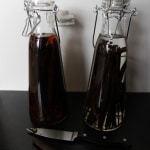 Because vanilla beans are expensive, you may want to start by making a small batch: put two vanilla beans into a small bottle, fill with vodka and allow to steep as above.