Last weekend while grocery shopping, I discovered that Wiener Zucker has a new product in a little pink box called Puderzucker (powdered sugar). According to the box, it’s very fine and was made especially for fondant, cupcake toppings and buttercream frostings. Here’s to hoping it lives up to that promise and therefore no more pre-pulverizing the Staubzucker (powdered sugar) for frostings!

The Mascarpone Frosting recipe calls for mascarpone, powdered sugar, cream cheese (what!) and heavy cream. It is amazing! You just whip everything together for a minute or two and you have the BEST cupcake topping. Ever. With a light and creamy consistency, it’s a little bit tangy and a little bit sweet, fluffy yet stable enough for piping and keeps for days in the fridge. On to the Tiramisu Cupcakes! I went with the classic flavors here to match the Mascarpone Frosting and found a recipe from Martha Stewart. She created an eggier cake which would mimic the ladyfingers in a tiramisu and not get soggy when drizzled with the espresso syrup. I would say she hit the nail on the head! I mostly followed her recipe except I used this new recipe for Mascarpone Frosting.

These cupcakes taste EXACTLY like tiramisu! Some would even say better than tiramisu. They also kept really well and still tasted perfect after two days in the refrigerator. 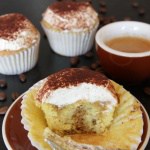 * In the U.S., I recommend using full-fat cream cheese spread, because that is closest to our cream cheese in Austria and I know it works with this recipe.