Cheesecake Cupcakes with Berries & Cream have been here on Living on Cookies for almost 4 years and are still one of my favorites. By special request, I made these for a recent event and the thought of the party guests looking up the recipe and seeing those dull and blurry photos struck a little bit of fear into my heart so I decided to give the recipe a purely cosmetic makeover with some bright and fresh photos. If you’re curious about how bad the old ones were, they are at the bottom of this post. They’re actually from the same photo, with one of them being the cropped version. So bad. 😀

Anyway, on to the recipe!

Cheesecake Cupcakes are very easy to make yet really impress with perfect cheesecake flavor and texture. They taste great without topping but I think the berries and cream make them extra special.

For the berry topping, you can use whatever berries you like, depending on the season (frozen berries work just as well): strawberries, raspberries, blueberries, blackberries, currants… or a mix of berries. You will have leftover berry sauce and whipped cream, which I love to use as pancake topping.

This is a great little recipe that makes exactly twelve Cheesecake Cupcakes and they bake really quickly but be sure to give them plenty of time to chill. Chilling for at least two hours allows the cheesecake to set and the crust to soften a little so you can hold these in your hand and take bites. 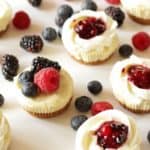 For the Cheesecake Cupcakes:

To make the Berry Topping:

To make the Fresh Whipped Cream:

** We only have cream cheese spread available here so that’s what I use.