Hummingbird Cake, with its unusual name and ingredients, calls for a little background explanation. The Hummingbird Cake first appeared in the southern regions of the United States in the 1970’s, and I, being from the north, had never heard of it until the advent of food blogs. The recipe originated in Jamaica and was called Doctor Bird Cake, named after Jamaica’s state bird – a variety of hummingbird.

Tropical-Jamaican ingredients like bananas, coconut, pineapple and rum flavor this cake and it is also laced with pecans, which are local to the southern States. Hummingbird Cake is typically a beautiful layer cake filled and frosted with traditional American Cream Cheese Frosting. By making the cake in a brownie pan instead of in layers you get all the flavor while saving a ton of time – all the sooner you can dig in to this yummy treat. 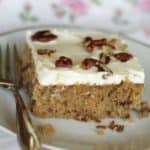 Print Pin
No ratings yet

*Find a more detailed post on making Cream Cheese Frosting using European cream cheese here.
Based on a recipe from The View from Great Island, with many changes to accommodate the bigger pan size.