Pumpkin puree is the secret to making these vegan brownies moist and fudgy but they don’t taste like pumpkin, just chocolately and delicious. Pumpkin Brownies are also healthier and lower in fat than regular brownies.

If you don’t have canned pumpkin puree, you can make it yourself and it’s so easy! I recommend using Butternut squash or Hokkaido, “Red Kuri” squash. I have a detailed post here on how to make homemade pumpkin puree but it really comes down to these four easy steps: 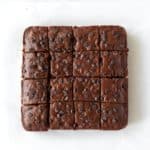 This is a small batch recipe that is quick and easy to make – you don’t even need an electric mixer.