Zucchini Brownies have been around for decades. I’m fairly certain the recipe was created to use up some of the zucchini that grows proliferously in vegetable gardens at this time of year.

And you absolutely cannot taste the zucchini! It's just there to lend these brownies their amazingly moist, dense and fudgy texture. I have been known to purchase zucchini just to make brownies.

By happy coincidence, Zucchini Brownies are low in fat and nearly vegan, containing no eggs and only a little bit of butter in the glaze. You could replace the butter with margarine to make them completely vegan. They are also packed with veggies and low in fat. Granted, they do contain white flour and sugar, so I won’t go so far as to call this recipe “healthy,” but I consider Zucchini Brownies to be a guilt-free treat. 😉 The batter is perfect once it absorbs some of the moisture from the zucchini. 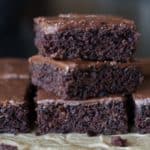 *To make this recipe vegan, use margarine instead of butter. Recipe adapted from Crazy for Crust.