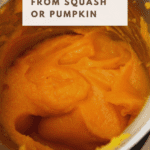 Making your own pumpkin puree is as easy as pie! 😉

Pumpkin Puree is made in three simple steps, which I’ll get to in a minute. First, let’s talk pumpkin. When a recipe calls for pumpkin puree, they almost always mean canned pumpkin, which is actually made from a type of butternut squash. I have made pumpkin puree using butternut squash, as you see in the photos, and it works perfectly. Plus, as in all things homemade vs. store-bought, everything tastes better when prepared from scratch using homemade pumpkin puree.

Yes, making your own pumpkin puree is more time-consuming than just opening a can but here’s what I do. When the pumpkins in our garden are at their peak, or when butternut squash is on sale at the store, I roast, puree the pumpkin and freeze it so I have it on hand for whenever I want to bake something with pumpkin.

Otherwise, look for a sugar pumpkin or a pie pumpkin. Interestingly, the word “Kürbis” is German is used for both pumpkin and squash, which makes sense because pumpkins are really a type of squash. For pumpkin puree, I like to stick to the orange-fleshed squash that cooks up thick, not watery.

Now, on to the method, which couldn’t be easier:

1. Heat the oven to 350°F (170°C). Cut the pumpkin or squash in half lengthwise and, using a spoon, scrape out the seeds and stringy bits. Lay the pumpkin halves on a baking sheet, cut side down (or up, it doesn’t matter).

2. Roast the pumpkin in the oven for 40-60 minutes, depending on the size, until a fork can easily be stuck into thickest part. Remove from the oven and allow the pumpkin to cool for about 1 hour, cut side up.

3. Scrape the flesh from the skins and plop it into a food processor or blender. Puree until mixture is perfectly smooth. If it doesn’t puree easily, add 1 or 2 tablespoons of water. Store puree in heavy Ziploc bags in the freezer for up to 6 months. It's best to freeze the puree in 1 cup or 2 cup portions so you can easily thaw the right amount for use in recipes.

I have done quite of bit of researching on this and measuring on my own and have found 1 cup of pumpkin puree (canned or homemade) actually weighs anywhere from 8.5 to 10 ounces (240 to 290 grams).

So, my conclusion is not to worry about the exact amount of pumpkin puree TOO much but rather go by what you see. If there is excess liquid in your pumpkin puree, discard it before measuring. I still measure pumpkin puree in cups. And watch your pumpkin baked goods for signs of doneness rather than relying purely on baking times in recipes.