This is a really special post because it’s my 100th recipe on Living on Cookies! That’s 100 recipes in English and in German, 200 posts altogether! I created Living on Cookies in 2014 hoping to combine my passion for baking with earning some money. I have yet to make a cent from Living on Cookies and just blog for fun.

Nothing makes me happier than hearing that people are using my recipes and that the results turn out great! At the heart of Living on Cookies is my Conversions & Substitutions page, where I am happy to share the many things I have learned about measurements and ingredients in the U.S. and Europe. There have been well over 100,000 visitors to that page alone!

In case you’re curious, my number one most successful recipe is an Austrian one, and one that uses my favorite Austrian ingredient: Topfen. My most popular recipe is for Topfen Apple Squares.

I thought Blueberry Topfen Torte would be fitting as my 100th post because every celebration calls for cake and because my very first post on Living on Cookies was my recipe for Topfentorte. I explained all about Austrian Topfen (aka quark or farmer’s cheese) in that post. Blueberry Topfen Torte is like a blueberry swirled no bake cheesecake. I recently made this torte for a family gathering and it doesn’t just look super pretty but everyone loves how light and fruity it tastes.

Agar-agar is used to set the cream filling of the torte instead of gelatin. Agar-agar, which is a plant-based (vegetarian) gelling agent that is very simple to use. Just follow the directions on the package. 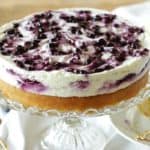 Agar-agar is used to set the cream filling of the torte instead of gelatin. Agar-agar, which is a plant-based (vegetarian) gelling agent that is very simple to use. Just follow the directions on the package.
Prep Time 1 hour
Cook Time 1 hour
Total Time 2 hours
Servings 12

*For the Blueberry Swirl we’re basically making a jam that contains only a third of the sugar that regular jam has, thus 3:1 which is 3 parts fruit and 1 part sugar. If you don’t have this type of jam sugar, you could use regular blueberry jam for the swirl, perhaps cutting the sweetness by stirring in lemon juice and frozen blueberries.