Fall is pumpkin spice time and with these Pumpkin Spice Cinnamon Rolls, we are truly in heaven!

In April I published my recipe for the Best American-Style Cinnamon Rolls and now it’s October and I think these Pumpkin Spice Cinnamon Rolls might be even better! These are softer and gooier than the originals plus they have those amazing, warming fall/winter flavors!

For making the pumpkin spice dough, you’re going to need pumpkin puree. If you don’t have any canned, you can easily make your own! I recommend using Butternut squash or Hokkaido, “Red Kuri” squash. I have a detailed post here on how to make homemade pumpkin puree but it really comes down to these four easy steps:

Not everyone loves frosting as much as I do so I don’t pour the frosting over all the cinnamon rolls, but save it for on the side so people can take as much or as little as they want. This has the added advantage that you can store the unglazed cinnamon rolls covered at room temperature. Cinnamon rolls topped with cream cheese frosting have to be stored in the fridge.

Cinnamon rolls are best when served warm! Even after two days, you can reheat them and they will taste like freshly baked.

If you want to use this recipe to make overnight Pumpkin Cinnamon Rolls and bake them fresh in the morning for breakfast or a Christmas brunch, you can! I’ve included the instructions on how to do this in the recipe below. 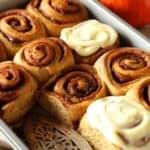 *If making ahead, at this point, you could place the rolls in the refrigerator overnight. Allow them to come to room temperature and rise the next day while the oven is preheating before baking as above.
Recipe adapted from With Peanut Butter on Top.