Homemade, fudgy dark chocolate brownies get taken to the next level with swirls of tangy cheesecake, fruity raspberry jam and pops of baked in raspberries.

I’ve been tweaking my favorite fudgy brownie recipe with every brownie variation I make and by now my brownies are pretty serious stuff.  I always make them with real dark chocolate. The dark chocolate adds depth and richness to the chocolate flavor that you can’t get from cocoa powder.

For the raspberry swirl, I like to use seedless raspberry jam just because I feel it looks prettier and some people don’t like the seeds but you can use either seedless or regular raspberry jam.

I like to add fresh raspberries to the brownies too, just poking them into the swirled brownie batter right before baking. I’ve tried this with frozen raspberries but I didn’t love the flavor and texture of them in the finished brownies, kind of blah and wet. If you can’t get fresh raspberries, you can leave them off altogether because the raspberry jam itself has plenty of flavor.

These Raspberry Cheesecake Brownies will wow your taste buds. They are decadent and delightful. They’re perfect for summer barbeques – just make sure to grab one before they are all gone! 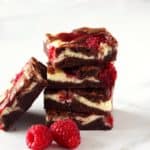 For the brownie batter:

*In Europe, cream cheese is only available as a spread so this is what I use. If you are using American cream cheese in blocks, your cheesecake mixture will be slightly thicker.