It doesn’t get any more Austrian than this recipe! Kaiserschmarrn, or “Emperor’s Mess,” is an egg-rich pancake that is torn into bite-sized pieces and then generously dusted with powdered sugar. It is usually served with a fruit sauce like applesauce or this homemade plum sauce, Zwetschkenröster.

My recipe for Emperor’s Mess is an easy one: all the ingredients are whisked together in one bowl, skipping separating the eggs and beating the egg whites and it also doesn’t need to finish baking in the oven. Buttermilk does its magic here, making the pancakes fluffy and adding a slight tang. This is one time when being lazy pays off! Austrian Zwetschken, or “prune plums” are used for making the stewed plum sauce and happily they are in season right now. However you can use any fresh, ripe plums for the sauce. Making the sauce is as easy as cutting up fruit and letting it simmer. We adore homemade stewed plums! They are cinnamon-y and tart and the perfect accompaniment to the “torn pancakes.”

Here’s a little cultural and historical background if you’re interested: it is said that Emperor’s Mess gets its name from the Austrian Emperor Franz Josef I, who loved this creation of the royal chef. Schmarrn means “mess” or “silliness” or, loosely translated, “mistake.” Emperor’s Mess can be a dessert but is usually served after a vegetable soup as the main course for lunch or supper. An Austrian probably wouldn’t eat it for breakfast but that doesn’t mean you can’t. 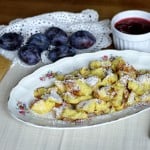