Here’s my version of the Cheesecake Brownie. I’ve been making these since I was a teenager. Back then we called them “Zebra Brownies.” 🙂 You can also call them Cream Cheese Brownies or Cheesecake Swirl Brownies if you want to.

This is not the recipe I used for Zebra Brownies when baking in the ‘80s. (Yes, I was a teenager in the 1980s! The Reagan administration, Cindy Lauper, Pretty in Pink.) I’m pretty sure that I used a doctored-up brownie mix for the brownie part then.

In order to make my favorite treat here in Austria, where brownies and brownie mixes didn’t used to exist, I had to slowly experiment my way to a good approximation of brownies in Minnesota. It was totally worth the effort because these Cheesecake Brownies are the bomb! Spread two-thirds of the brownie batter into the baking pan. Spread all of the cream cheese mixture over the brownie batter. Distribute spoonfuls of the remaining brownie batter over the cream cheese mixture. They can be just randomly placed – mine looked like this. Then turn the pan and swirl the other way. My advice on swirling is to stop while you’re ahead. Too much swirling and there’s not much cheesecake left in the brownies. They won’t look pretty – mine looked like this when I was done swirling. This is what they look like when they’re done baking. You want the cheesecake part to be set but the brownies should still be moist. 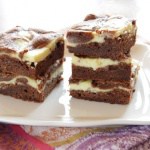 Use restraint when swirling the cream cheese and brownie layers together. Big swirls.